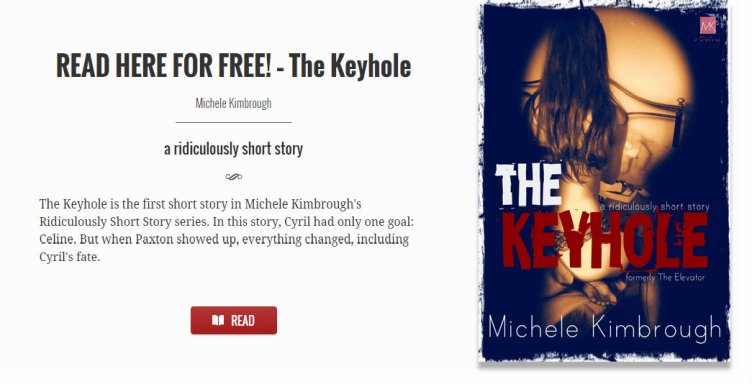 The elevator. That was the plan. That was where he’d hold her captive—with nowhere to go, nowhere to run. There would be no way for her to ignore him. Just him and her and the elevator’s slow ride to the top floor where they both resided in side-by-side apartments. Yeah, it was a good plan. Then maybe he’d muster up the nerve to ask her name. Maybe she’d even give him her phone number.

When she stepped into the elevator and the doors were about to close, a lone hand reached in, activating the sensors, and the doors re-opened. Dammit. Another passenger. Now Cyril had to wait until the other passenger got off before he could make his move.

“What floor?” Cyril asked the extra passenger, hoping for the second or third.

“It’s already pressed, thanks,” he said, giving Cyril a once-over scan making note of his deliberate disheveled style. “Looks like we’re all going to the top.” The passenger then smiled at her.

Cyril watched her return the man’s smile. He didn’t like it. It made him jealous even though he knew he didn’t have a right to be.

“Hi, I’m Paxton,” the interloper said, extending his hand to her.

She said, “Celine.”  Cyril was certainly put off by the way she glanced at Paxton with her lopsided smile.

They both looked at Cyril, and he shrank against the wall. Why did Paxton have to ruin everything?

He gazed at Celine, chin-in-chest, and smiled wryly. “I’m Cyril.”

It pained Cyril to answer. He just wanted Paxton off the elevator. But they were only on the fourteenth floor, so he said “2513.”

“That’s next door to me. I’m in 2511,” Celine volunteered. But Cyril already knew that.  He loved her voice, the way the words swirled around her tongue and clung to her lips. He wanted to taste each sweet syllable. He licked his lips but saw Paxton leaning in a little closer to her.

“Maybe we could have drinks,” Paxton suggested to Celine, staring down unabashedly at her ample cleavage that rose and fell in steady breaths.

She nodded. “Sure. Why not.” She reached in her purse and pulled out a card. “Here’s my number. Give me a call.”

Cyril’s fiery temper nearly caused him to explode. Instead, he sucked in a deep breath, stood straight — chest out, chin up. He did an emotional shake-off.  Finally, he thought as they reached the twenty-fifth floor.  Each of them exited the elevator. Paxton went right. Cyril and Celine went left.

“Did you know this building used to be a hotel?” she asked.

Cyril looked around and then at her. Was she talking to him? This was the first time in the six months they’d lived side-by-side that she had said anything to him. “Yeah,” he said.

Cyril stopped. He tried to close his mouth which had just fallen open, but his jaw wouldn’t unlock. He looked around the hallway to make sure she was talking to him. Then his eyes fell on her crooked smile.

“Yes, I’m talking to you, Cyril,” she said, lightly brushing her hand against her neck, allowing it to slide slowly down until it came to rest at her heart.

Cyril was sure he had stopped breathing. Sweat beaded above his lip. His voice quavered when he attempted to answer. He cleared his throat and tried again. “I can’t,” he said, looking away, trying not to focus on her cleavage or her smile—and definitely not on her piercing hazel eyes.

He wanted to kick himself. He couldn’t believe he had wussed-out. He had an invitation into her apartment, and he blew it. It was all Paxton’s fault, though. If he hadn’t gotten on the elevator, Cyril could have executed his plan. Cyril would have been in control and not caught off guard by Celine’s friendliness. He slammed the door when he entered his apartment, tossing his keys onto a chair and kicking off his shoes.

The shower was scalding hot—torturous, actually—but he thought he deserved the punishment. He slipped on his pajamas as he sat in the dark bedroom. Turning down his bed, he noticed a tiny beam of light spilling into the room. Cyril followed the light, looking for its source. It was streaming through the keyhole in an old door that had been sealed shut. His apartment and the one next door used to be adjoined when the building was a hotel almost half a century ago.

He wondered what was different tonight. Light had never spilled through the keyhole before. He crouched down and peered through the keyhole. Celine was sitting on her bed. He couldn’t make out what she was doing, but she was clearly doing something. She threw her hair back and stood, hovering over the edge of the bed. Her bare behind was bent slightly toward Cyril, who dropped to his knees, his hands pressed against the door as he leaned closer, trying to get a better view.

He couldn’t see Celine anymore. Where did she go?

The man’s body toppled and slumped over the side of the bed. Cyril saw his face. It was Paxton. Cyril fell forward into the door, banging his head against it. He was sure Celine heard the thud, so he swiftly shifted his body away from the door and pressed himself against the wall. He rubbed his eyes and thought about what he had just seen. Could Celine have killed him? Paxton must have done something to her and she defended herself. Yeah, that had to be what had happened. Cyril hadn’t heard anything—no screams, no sounds of struggle, nothing. Maybe it had happened while he was in the shower.

He turned sharply, leaning into the door, peering through the keyhole again. This time, Celine was standing nude in stilettos, facing the door. She squatted, a bloodied cleaver in her hand, and looked directly at the keyhole. Cyril fell back, hoping she hadn’t seen him. His heart raced so fast that he could hardly breathe. Once he caught his breath, he leaned cautiously toward the keyhole. When he did, his eyes met with hers.

“Hi, Cyril,” she said seductively. “Wanna come out and play?”

If you like this story, check out my novels available on Amazon.

4 thoughts on “The Keyhole – A Ridiculously Short Story”

Talk to me. I'd Love to hear what you think Cancel reply